Kevin Harmon lives in Aurora and works in West Chicago.

Which doesn’t sound like a bad commute, until you consider it starts off with a four-block walk at night to catch that last bus of the day to the Metra station in Geneva. From there, Harmon catches the train that takes him to West Chicago, where he hops off the train and onto a bike he keeps chained there for a half-hour ride to his third-shift job at Tomenson Machine Works.

“It’s extremely hectic,” said Harmon, noting that he leaves the house at 5:30 in the evening to get to his 9 p.m.-5 a.m. shift. And because the commute home is just as long, he doesn’t get back until 8:30 that morning.

Still, he’s mighty happy to make that commute day in and day out.

Homeless for over a year, Harmon last week was able to move into his own sparsely furnished but tidy apartment on View Street, thanks to that job at Tomenson, where he creates heads for hydraulic systems.

He’s also especially thankful for the second-hand bicycle that enables him to make it all come together.

Without those two wheels, he says, “I would not be able to keep this job … or the apartment.”

Harmon is hardly unique. Transportation is often the only thing keeping Hesed House residents from getting on with their lives. While a car is always preferable, it’s not always possible.

That’s why there was plenty to celebrate earlier this month when Aurora Central Catholic senior James Glaser donated a whopping 31 second-hand bikes to the Aurora homeless shelter that he had collected and refurbished for his Eagle Scout project.

Glaser, a member of Holy Angels Scout Troop 26, got the idea for this project after driving past a local junk yard and seeing “hundreds of kids bikes piled up there.” When he and mom Jamie checked with Hesed House about repairing them for the children, they were told there’s plenty of kids bikes donated throughout the year. But it’s the adult bikes that are so desperately needed.

Tom Aguilar, assistant director of maintenance and facilities at Hesed House, and a Scout leader himself, sees day in and day out how something as ubiquitous as a bicycle “can be life-changing.”

Between 180 and 225 homeless adults at any given time have no transportation at Hesed House, he noted. And “we go through bikes like candy. We can never have enough.”

Harmon, who took training to become a certified machinist during his eight-month stay at Hesed House, knows that first-hand.

He started off with two bikes to get to the West Chicago job earlier this month while still living at the shelter, he said. The second set of wheels got him to the Aurora bus stop, with the better bike used for the “long distance ride” from the West Chicago train station to his job. The older one eventually wore out, so he’s “just really thankful” he can walk from his new apartment to the bus stop now.

Glaser’s goal was to get 30 bikes to the shelter by spring, so when the weather turns nice, residents can take full advantage of them.

The young man solicited support from family, friends and fellow Scouts, all of whom not only helped find old bikes – the furthest away were three picked up in Marengo — they raised money for parts that included wheels, seats and brakes.

At one time, noted James, he had a team of 12 helping him put them back together. As for his mom, Jamie Donile: “I knew nothing about bike repairs before,” she said. “But I’m an expert now.”

On March 20, a U-haul filled with those refurbished bikes pulled up at Hesed House to deliver his goal, plus one. This army of bicycles is currently in a warehouse, said Aguilar, just waiting for the weather to turn so they can be handed out. And James admits he’s even got another 15 old bikes “I’d still like to repair” at some point that will also go to the shelter.

The Eagle Scout says he’s learned a lot from this project, including organizational skills and the importance of giving back to a community. But more than anything, he added, “I now know how it’s the little things that can make a difference.”

Harmon gets that. His commute may be a bear. But he loves his job and is “really proud” of the apartment he now calls home. 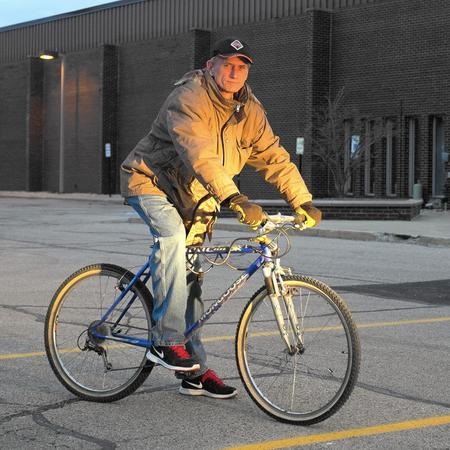