PLEASE NOTE – Hesed House is unable to accept large donations of clothing and/or other items. If you have a question about whether we can accept something, please email donate@hesedhouse.org. If you are considering holding a drive for Hesed House, please email drives@hesedhouse.org in advance of beginning your collections. Thank you for understanding!

There will be no food after 5 p.m. or electronics on the field, where they’ll sleep overnight.

The “sleep out,” which will run April 18-19, is part of an effort by East High students to raise money and awareness about poverty and homelessness in Aurora. The students hope to raise $15,000 and split the funds between Hesed House and district families in need.

Part of the idea for the sleep out came from seeing a similar event at Aurora University where students aim to raise awareness about homelessness by sleeping on the campus’ quad, which began in 2011.

The East High students said the fundraiser was a good way to get a large group of students involved and give back to their community.

“People look to give back around Thanksgiving and Christmas, but it’s a year-round factor and people seem to forget that,” said 18-year-old Alfonso Dieppa.

Dieppa and the other students are fundraising as part of an optional independent study and service project connected to a course called “survivor literature.”

English teacher Shane Gillespie started the course seven years ago. He and his wife, Sarah Gillespie, now co-teach six sections of the class, in which students read and analyze nonfiction books about survival over trauma.

Last year, students walked to Soldier Field in Chicago from East High after reading a book about the life of Ishmael Beah, a former child soldier who walked miles after he was displaced from his home in Sierra Leone. Three years ago, students in the class traveled to New Orleans to help survivors of Hurricane Katrina.

This year, the students voted to focus their independent study on poverty.

“The majority of the class felt like it could connect to the community out there who are in these situations,” said 17-year-old Diego Gutierrez.

More than nine in 10 students in East Aurora are considered low-income and 186 students of the district’s 14,700 were homeless this year.

In conjunction with the project, the students chose to read the 1991 nonfiction book “There Are No Children Here,” by Alex Kotlowitz. The book follows the lives of two young boys as they grow up in Chicago’s Henry Horner Homes, a public housing project that was demolished in 2008.

Kotlowitz also co-produced the 2011 documentary “The Interrupters” about efforts to prevent violence in Chicago and helped create the award-winning, two-part “Harper High” radio series that aired in 2013 on “This American Life” and explored how students were coping with gun violence in their neighborhood.

Kotlowitz will be coming to speak to the students, who read his book in November and December.

Seventeen-year-old Odessia Lozada voted to read the book because she wanted to learn more about the choices adults make that can affect their children.

“Children are put in positions because of the family they’re in,” she said.

Henry Olivas, 18, said he wanted to read the book because it took place in Chicago, and the poverty and violence in the story mirrored some of what he sees happening in Aurora. He saw the service project as a way to help the community and to improve it, he said.

For some students, what happens to the two young boys in the book was surprising. They expected to see them flourish and get out poverty, but that doesn’t happen.

“It was kind of heartbreaking to find out that a lot of the children are looked down upon and, for the most part, children who are in poverty don’t make it out of poverty,” said 17-year-old Mariah Myrtil.

Kayla Ocon, 17, said she identified most with the younger brother in the story, who tries to study and excel at school.

“I felt he was more like me because he wants to get out,” Ocon said. “I’m wrapped in a bubble, and I want to get out and experience the world the way it really is.”

Though the book was written 24 years ago, students said the issues it addresses still resonate with them.

“You would think that times would change,” said 18-year-old Felicia Seawood, “but they don’t.” 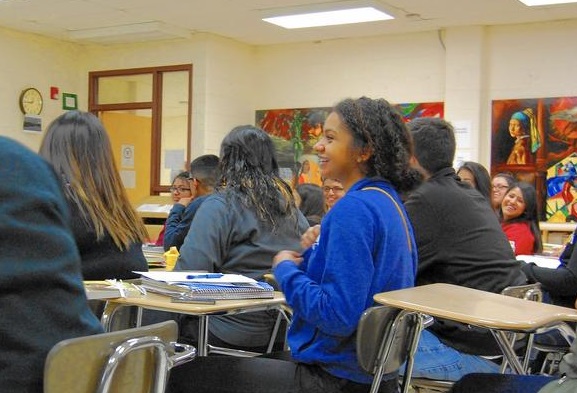