The First Time I Volunteered: a Hesed House Journal 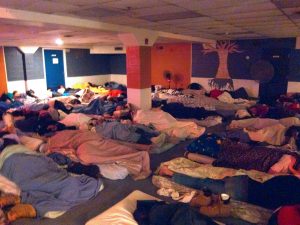 She had weathered lines on her face from living a rough life. Her hair was clean but brittle with gray roots. Her winter coat was mostly clean, but made for a man and twice her size. I think she was in her 50s.

I was thirteen years old, in the eighth grade (the same age as my son). My voice cracked a little when I spoke, but I didnt talk much that night. I mostly just watched and served sliced ham cooked with pineapple slices dotted with red cherry centers.

It was the first time I volunteered in a homeless shelter. I knew about Hesed House but had never been there before. I only signed up to volunteer because most of the girlsand none of the boysin my church youth group were going. I thought I could get a date. Once I got to Hesed House, though, none of the adolescent girls who had lured me to the shelter mattered. I was fixated on the fifty-year-old woman in the oversized coat.

It was her birthday. Other women in the shelter had carefully wrapped modest items to give her as gifts (mostly personal care items and a winter hat). They sang Happy Birthday and gave her a pink cupcake they had swiped from the dessert tray.

The woman closed her eyes, made a wish and blew out a flaming match that had been stuck in the cupcake like a candle. As smoke rose from the blackened match, the woman smiled a half-smile, genuine, but not a full grin.
I dont know if it was a memorable birthday for her. Maybe it was the only birthday she celebrated in a shelter, or maybe it was one of many. I dont know. Looking back now, I realize that it was a pivotal, life changing moment for me.

The stereotype disappeared, allowing the humanity to emerge from behind my preconceptions.

Two decades later I am the Executive Director of Hesed House, and I still dont see homeless people. I just see people. And it is on behalf of those individuals and families who happen to find themselves homeless this Holiday Season that I ask you to give generously to Hesed House.

You can still donate this tax-year by mailing your check today or donating online right now: https://help.hesedhouse.org/

My personal goal is to get every person out of Hesed House and back into their own apartment before their next birthday. It is in pursuit of that goal that we will apply your generous donation.